Monitoring backend services, a tale of delays and dogs

A web application often has to perform tasks asynchronously with respect to user input, that is, outside of the request cycle.

Typically this includes sending emails, but can also be updating various kinds of counters, tracking, priming cache, scaling uploaded images, and so on.

In some cases the user is a developer, or a scheduler in the system, running some Rake task but not caring to wait for the result.

In all cases, to run jobs asynchronously, you will need two subsystems:

In Rubyland there is more than one option to run this; the most classic are certainly DelayedJob, Resque, and Sidekiq.

A quiet life in Rubyland

At HouseTrip, one of our guidelines can be phrased as

if you don’t need it now, run it async. don’t make the user wait.

We’ve used DelayedJobs for quite a while; originally with the (default) ActiveRecord-backed queue, and switched to a Mongo-backed queue when the going got tough (somewhere north of 1 job/second), and ActiveRecord (and the SQL database behind it) couldn’t take it anymore.

Things were as simple as “delaying” method calls:

Because some jobs are more urgent than others, we started using DelayedJobs priorities: each type of job would be assigned an integer priority from 0 to 999, and classified jobs by their relative importance as we went. So whenever a new job was introduced, “job X is more important than Y” became “job X should have a lower priority than Y” (yes, it’s backwards, but that’s how UNIX decided it would be a long while back).

What priorities really define is multiple, independent queues. The workers will always pick up work from a lower-priority queue before other work. Other than this ordering, the workers are agnostic: they accept work from all queues.

It quickly becomes natural to do this:

It’s served us well, until a little over a year ago.

You’re not in Kansas anymore

But then the going got tougher. Our main Rails application had a lot of stuff to run asynchronously, which translates in a fairly congested queue (2 jobs/second average, peaks at 20 jobs/second).

We had lots of different types of jobs (dozens).

And what was bound to happen, happened: jobs that was supposed to run didn’t, when jobs did run and when they didn’t was a bit of a mystery, computers burst into flames, and product manager heads started spinning.

Lack of trust in our good old friend DelayedJobs developed, and the more adventurous amongst us started suggesting solutions.

— Let’s put my stuff at a high priority, the first one said. I was told it should always be done as soon as possible..

— Let’s use Sidekiq, the second one said. All the cool cats are using it.

— I know, said the third one. Let’s have a dedicated queue and set of workers just for my job, since it’s, like, so very important!

Unfortunately, I believe those are all coping mechanisms.

The first piggie is confusing importance and urgency of a job. Importance is almost impossible to define because it’s relative; different stakeholders will have different views, and importance may well vary over time as well, making it a maintenance nightmare. As I pointed out earlier, this was our original mistake—creating different queues (priorities) by importance.

The second piggie thinks there’s a silver bullet. In computing, there rarely is; and when we suggested this, we were just being the victims of hearsay and non-comparable experiences. Sidekiq, for instance, has a few extra features (notification of batch completion, for instance); but in our scenario it’d be a 1:1 replacement for DelayedJobs. So Sidekiq won’t solve our issue—it’ll just give us lower job latency, and possibly better job throughput, mainly because it’s Redis-backed.

The third piggie is less wrong than the other first two. Having a dedicated queue and workers for one or more job types (i.e. dedicated infrastructure) can, indeed, increase reliability. What he might be missing is that he’s trading that for increased cost of maintenance (another part of the stack now needs management and scaling), and that this rationale can be repeated ad nauseam: everything’s important, so everything should get dedicated resources.

By that last logic, we’d have dedicated web stacks (dynos if you’re running on Heroku) for every page, so we can micromanage latency on a page-by-page basis.

Back on the Yellow Brick Road

Taking a step back, the root of the problem is really what we’ve stated concerning the first piggie: we tend to confuse importance and urgency of asynchronous tasks.

So we’ve decided to turn around. Instead of dealing with the impossible task of pitting each type of job against every other one, we ask ourselves (and our product people): how urgent is this job? In the sense, by when should it complete?.

Implementing this turns out to be simple. We’ve added some naming sugar:

Our DelayedJob-based queue/dispatch subsystem now makes a simple promise: if you give me a job with HOUR priority, I’ll start running it within the next 60 minutes. It’s a promise of timely execution.

At this point it’s just a promise; something extra will be needed to enforce it, as if someone shoves thousands of jobs in the REALTIME queue and you have only one measly worker, they’re not going to run magically.

Switching to this takes a bit of discipline but works. We just have to fight the occasional urge to confuse REALTIME with “it’s really that important”. We reserve REALTIME job jobs that should be completed by the time a user of the web frontend issues their next request.

The lesson we learned is fairly simple:

Urgency-based scheduling works because there is a rational answer to the urgency question, but only emotive answers to importance.

Urgency bands helped us manage a growing number of jobs and job types and still have jobs (mostly) delivered in a timely fashion… until it didn’t. Again, some jobs ran late, and confusion and despair ensued!

While we still believed “urgency over importance” was the way to go, we were missing a key piece of the puzzle: we hadn’t addressed the lack of confidence developers had in whether the promise of timely execution would be kept.

The problem being trust, the obvious solution is transparency and reason. We are breaking the promise as soon as a job gets started after its queue’s time-promise (5 minutes, 1 hour, etc.) has elapsed since it was scheduled.

We chose to define queue staleness as the age of the oldest un-executed scheduled job on a given queue, divided by the queue’s promise. When this value is greater than 1, the queue is stale.

Whenever any queue is stale, the queue/run subsystem is over capacity, and you need more workers.

When none of the queues are stale, it’s running under capacity, and some of your workers are idling.

Implementing this turned out to be quite easy:

STATSD being a Statsd client, in our case courtesy of the datadog gem (code simplified for the sake of the discussion).

The last bit being cute graphs and setting up alerts, which probably took 15 minutes overall. Here’s a few of the staleness graphs: 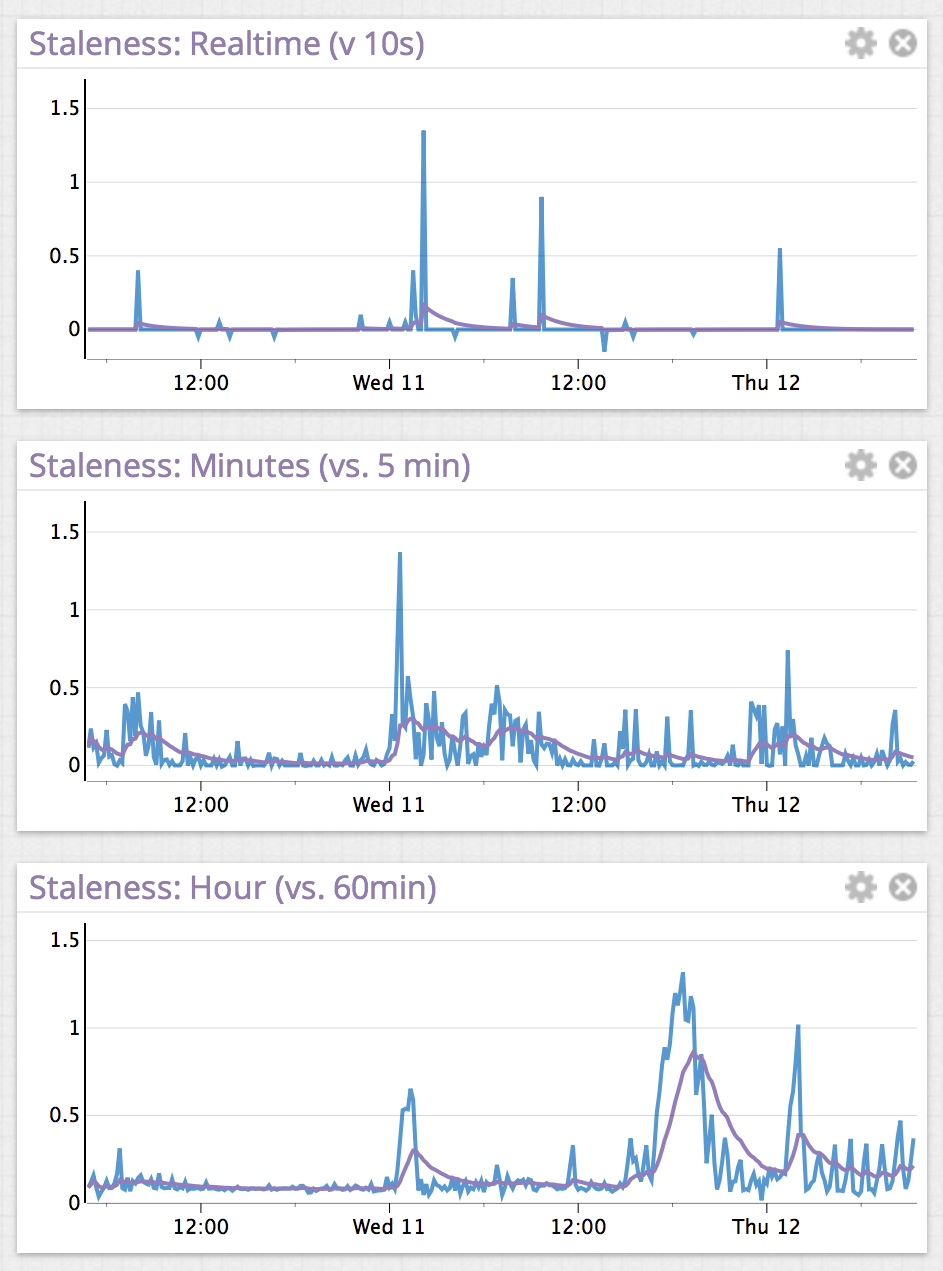 All of us get an email alert if any of these go over 1.

This kind of monitoring is obviously an ops’s wet dream: volume of jobs per queue, throughput of jobs, failure rates… all become easy to monitor, and help answer other questions. The most useful graphs are the staleness graphs as they allow for capacity planning, which is crucial for a fast growing app.

They lived happily and had many little jobs

Our current setup lets us run quite a few jobs (1M/day). They’re run mostly timely, we do have a few staleness spikes around nightly events (which will eventually need to be refactored).

Importantly, we now know when we’re underperforming, as we get alerts when we need more DelayedJob worker capacity.

Working on our queue/run backend has given the team a taste of monitoring beyond the usual Nagios-style server monitoring and the NewRelic-style frontend application monitoring.

We’re thinking to start reporting on a “job Apdex” metric for jobs to reflect how timely jobs are typicaly run (we’ll find another name if Apdex is a trademark).

Finally, we’re still very much considering a switch to a lower-latency queue/run platform like Resque. But for know, we’ve gotten rid of the main pain points.

Have fun with jobs!